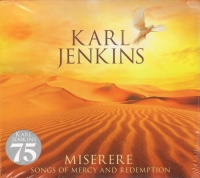 Jenkins Miserere Songs Of Mercy & Redemption Cd
RRP:
£12.75
Product #:
3116417
Availability:
In Stock
Edition #:
4818580
Sir Karl Jenkins continues his 75th birthday year celebrations with a brand'new album' Miserere' Songs of Mercy and Redemption' released on 11th October' The new work' released on Decca Records' is dedicated to all who have suffered or perished during the conflicts in the Middle East over the last 70 years' Jenkins was motivated by the desperate situation for the millions of people displaced and impacted by the cruel effects of war and hoped the healing and uniting powers of music could be used